Although most visitors to the largest of the Canary Islands are unlikely to venture outside the beach, there is so much more on the island of Tenerife. From Michelin-starred restaurants to truly spectacular hiking trails, here are 13 reasons to experience the island at least once in your life.

With an average low of 17 ° C (62 ° F) in January and high of 25 ° C (77 ° F) in August, Tenerife has a pleasantly temperate climate all year round. Known as ‘ Isla de la Eterna Primavera ‘ (‘Island of Eternal Spring’), it averages more than 300 sunny days a year , and rain rarely lasts long. However, the weather can vary enormously between the north and south of the island: warm winds from the Sahara keep the south of the island warm and dry, while the lush and green north tends to be cooler and wetter. In the end, it is not much more than an hour’s drive between the two.

One of the most spectacular natural attractions on the island, Los Gigantes cliffs are part of this western region, home to countless secluded resorts. The impossibly steep formations rise to a dizzying 800 meters (2,625 feet), resorts have black volcanic sandy beaches and many secluded rocky coves offer beautiful, clear water.

The temperate seas around Tenerife are home to nearly 30 different species of whales and dolphins, which can be seen aboard b oats to diverge from either Los Cristianos or Los Gigantes most days. Journeys take around three hours, and some boats are arranged as pirate ships.

Tenerife’s newest and largest theme park , Siam Park with a Thai theme, is a relatively new attraction that has become hugely popular with tourists. The park is best visited during warm summer weather with family and children and offers water attractions, a lazy river of one and a half kilometers long and a huge wave pool and sandy beach. Go to the Tower of Power , an almost vertical slide of 28 meters that you shoot through an amazing aquarium.

In the week before Lent, carnival celebrations take place on the entire island. Along with Rio de Janeiro , the Santa Cruz de Tenerife Carnival is considered by some to be the most famous in the world after the Brazilian city. Every year the Grand Opening Parade starts with a colorful procession of floats and costumes that make their way through the streets. The end of Carnival is marked by the somewhat bizarre funeral of the Sardine ritual on Ash Wednesday: a gigantic image of a sardine sits on a throne carried on the streets of the capital followed by a procession of wailing ‘widows’; the sardine is then set on fire when it reaches Plaza de España .

Named after a small village in the northwest of Tenerife, the Masca region is one of the most popular walks on the island, starting with the village and ending with the rocky beach below. Beginners can arrange tours with different local companies, or more experienced hikers can only navigate the trail. Hikers have ample opportunity to enjoy spectacular scenery during the 8-kilometer journey and can take a boat at the end of the majestic cliffs of Los Gigantes.

Tenerife’s position between the Sahara and the Atlantic Ocean – as well as the lack of light pollution, high altitudes, clean air and exceptionally clear night skies – makes it an ideal place to look at the stars. Officially named Starlight Tourist Destination , the island offers many opportunities to gaze at the night sky, either through official tours or alone.

Teide National Park dominates a huge area in the center of Tenerife and is all about Mount Teide – the highest point in Spain at over 3,700 meters. It offers a varied volcanic landscape, pine forests and green valleys with a beautiful view of numerous hiking trails. Less adventurous travelers can still drive through the protected national park to admire the beauty of this part of the island.

I had already written an article about the volcano El Teide where I explain more about the mountain. Click on the link for the article: El Teide

It will come as no surprise that Tenerife has some really spectacular beaches (albeit with a little help from imported Sahara sand). A popular piece for locals and tourists alike is the pine-lined Las Teresitas , just a 10-minute drive from the island’s capital. On the north coast, the dark, volcanic El Bollullo is one of the most beautiful and secluded natural beaches on the island. Meanwhile, naturists can find a place to reveal everything on long golden sandy beaches of La Tejita on the other side of the island. Two fixed family favorites are Playa del Duque (1.4 km from our holiday home ) and Playa de las Vistas , both on the south coast. In short, there is a beach for everyone!

While it is certainly not known as a food destination, it may surprise many to discover that the island is home to no fewer than five Michelin stars in four restaurants. MB ( Martín Berasategui ) is an establishment with three Michelin stars, located in the Ritz-Carlton, Abama, and perhaps the best of Tenerife. Foodies should also try the family-run El Rincón de Juan Carlos for some spectacular interpretations of classic Spanish cuisine.

Guachinches originally refers to wine tastings organized by vineyards to sell their products, but is now used more to describe rustic settings where local wine is served with traditional tapas. In fact, traditional rutas de guachinches (guachinche trails) are similar to pub crawls and different places are visited in one day. Guachinches , however, adhere to strict rules, such as only serving wine and dishes produced by the owner.

By far the best way to experience the UNESCO-protected Teide National Park is to ride the cable car up the mountain. The eight-minute drive is not cheap, but is more than worth the incredible view of the volcanic crater, the beautiful national park and other Canary Islands over the sea on a clear day. The cable does not go all the way to the top, but three walking routes are available from the upper station. Note: trips to the top require special permission. The altitude will be difficult, even the most suitable, so it’s best to take it slowly. Or admire the view and head back into the cable car.

Teide is not the only mountain on the island that is worth exploring – the lesser-known Anaga Mountains are located on the most northeastern tip of Tenerife and consist of a number of beautifully secluded, rugged coastlines, deep ravines, traditional villages and humid forests. Formed by a volcano eruption about eight million years ago, it is the oldest part of the island and has been declared a biosphere reserve with the largest number of endemic species in Europe since 2015. Although hiking trails can be challenging, the views are particularly worthwhile and feel like a million miles (and years) of the package tour on the other side of the island.

Tenerife only for sun lovers or lovers of beautiful beaches? There is much more to get out of it! Tenerife is the largest and most densely populated of the 7 Canary Islands, with a fantastic diversity of villages and cities, natural landscapes, … And it doesn’t even have to cost money to discover all that beauty… 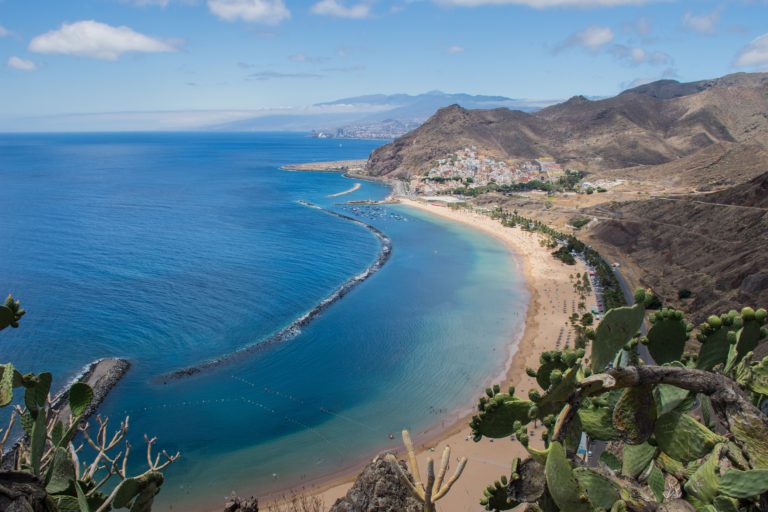 Whoever says Tenerife may think of the numerous beautiful beaches that the Canary Islands are rich. One of the favorite sights in Tenerife is undoubtedly the numerous beaches that Tenerife has. There is nothing better than a little dip in the sea during the lunch break or behind work. But it is hard to choose which beach is best in…

Do you like cycling and are you looking for a nice cycling holiday? The track is in good condition, little traffic, beautiful landscape that is preferably mountainous and above all: the weather must be nice. A radiant sun and a blue sky and all previous properties can be found in Tenerife. In short, Tenerife is the ideal island…